How do you get a certificate of Indian blood?

Take all of the guess work out of it and the best part is ...its FREE.

A CIB can often be obtained from the Bureau of Indian Affairs for FREE. If you do not know specifically which tribe, then try contacting the BIA closest to where your ancestors were born or lived.

Once you’ve determined what tribe you are claiming heritage from contact the tribe, using the Tribal Leaders Directory to locate a phone number and address, to ascertain if you are eligible for enrollment in the tribe. Each tribe establishes their own requirements for enrollment in the tribe. The Bureau of Indian Affairs will issue a Certificate degree of Indian Blood (CDIB) that shows your blood quantum and tribal affiliation. You will want to contact the BIA agency that provides services to the tribe you’re claiming heritage from in order to obtain the CDIB card, that information can be found in the Tribal Leaders Directory.

It’s a wonderful way for native people to anti-celebrate the day. 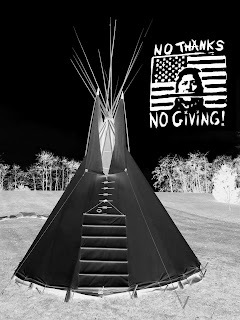 It’s about reflecting, remembering and celebrating that we are still here and our culture still survives. 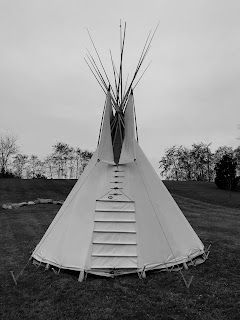 Historical estimates vary on the number of Native Americans who were wiped out after the arrival of early Europeans in the 1500s. 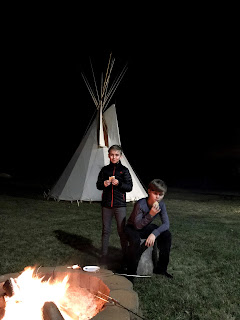 A 2015 paper estimated that the population of indigenous people was decimated by 90 percent in the Americas from 100 million to 10 million upon colonization. 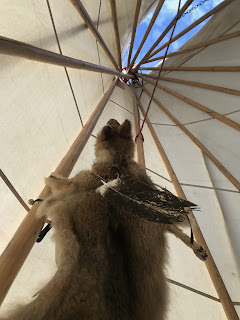 As of 2011, the United States Census Bureau counted 5.1 million Native Americans living in the U.S. 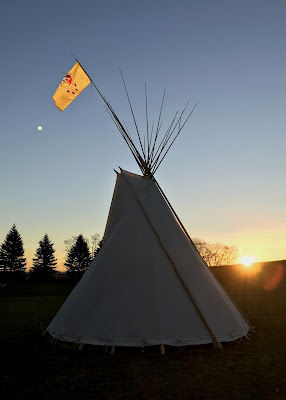 Mackinac Bands of Chippewa and Ottawa Indians, Ogema Daryll Brown speaks of how precious water is. 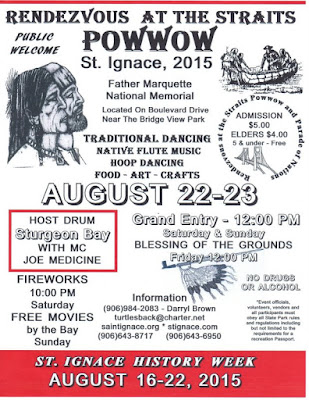 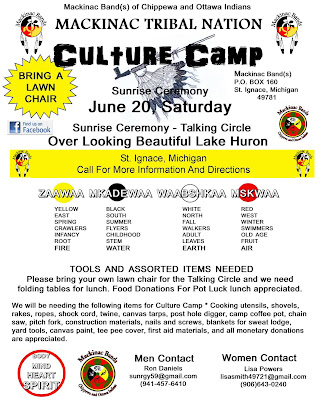 The Meaning of the Eagle Symbol

The meaning of the Eagle symbol was to signify courage, wisdom and strength and its purpose was as the messenger to the  Creator. The eagle was believed to carry prayers to the Great Spirit in the Spirit World and also had a special connection with visions. 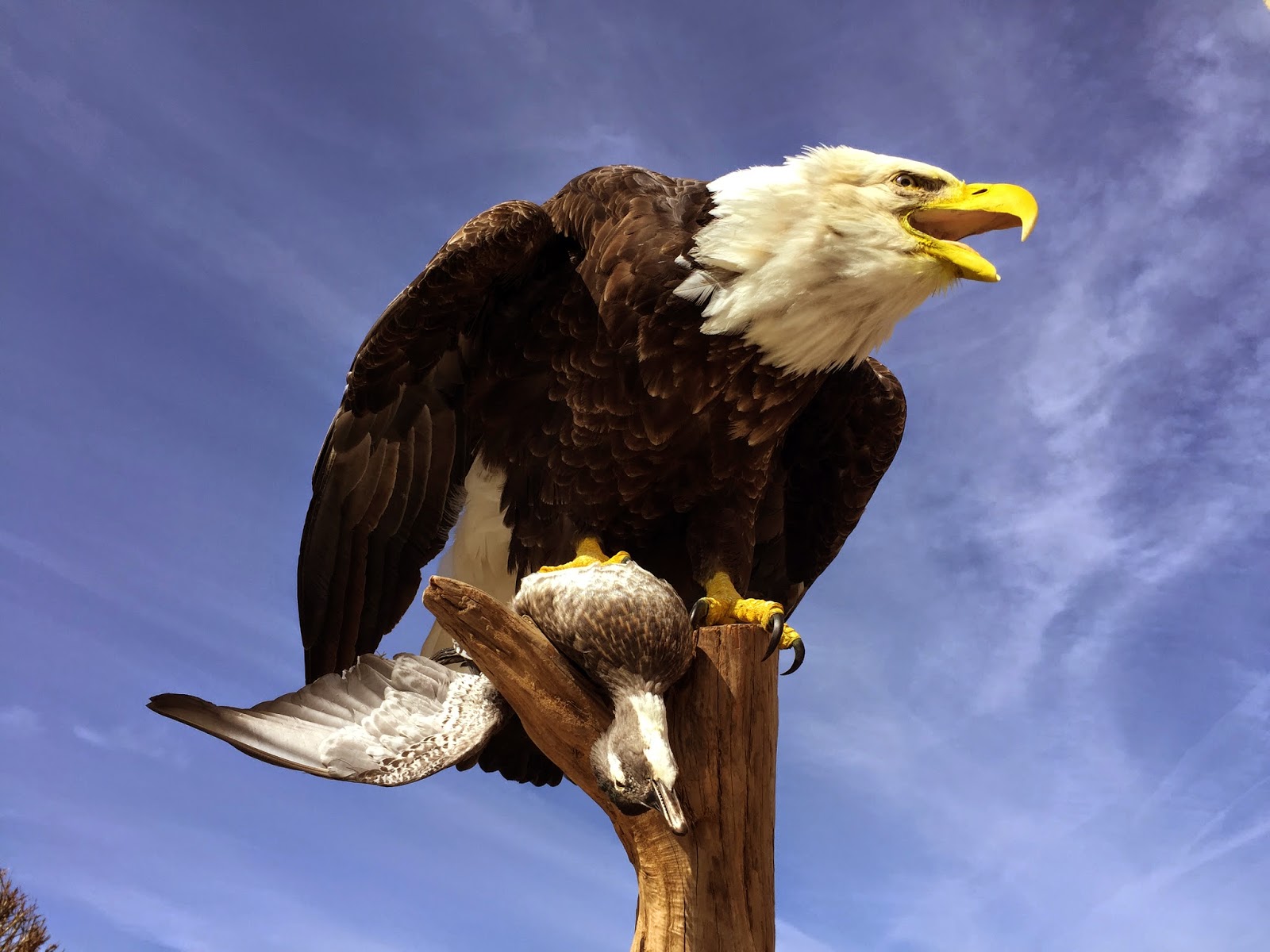 Eagle feathers were highly significant to the Native American Indians and the bones of eagles were used to make the whistles and flutes used at religious ceremonies and rituals. It was a custom to hold an eagle feather aloft when saying a prayer and during special council meetings eagle feathers were held as an assurance that the person was telling the truth. 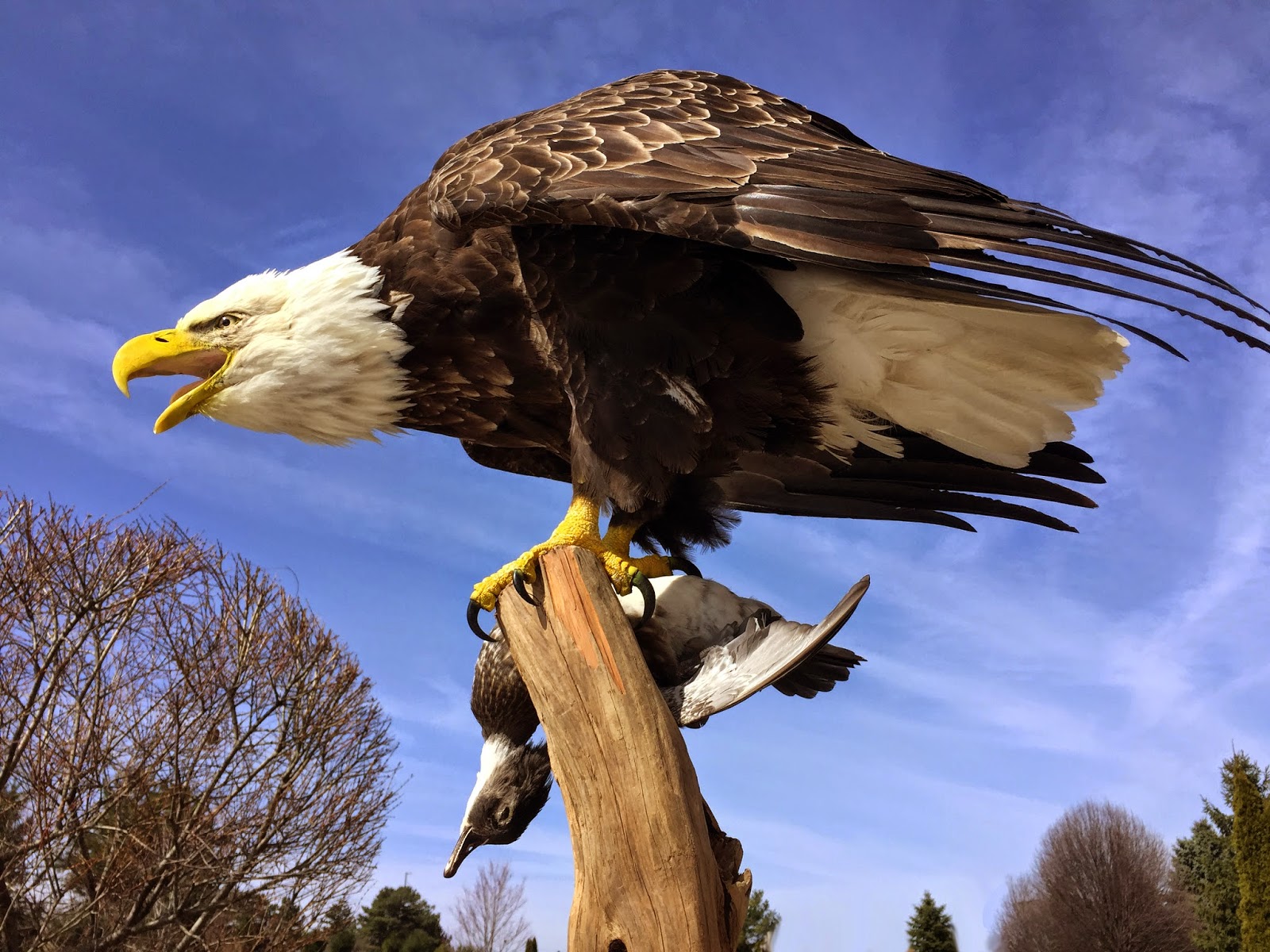 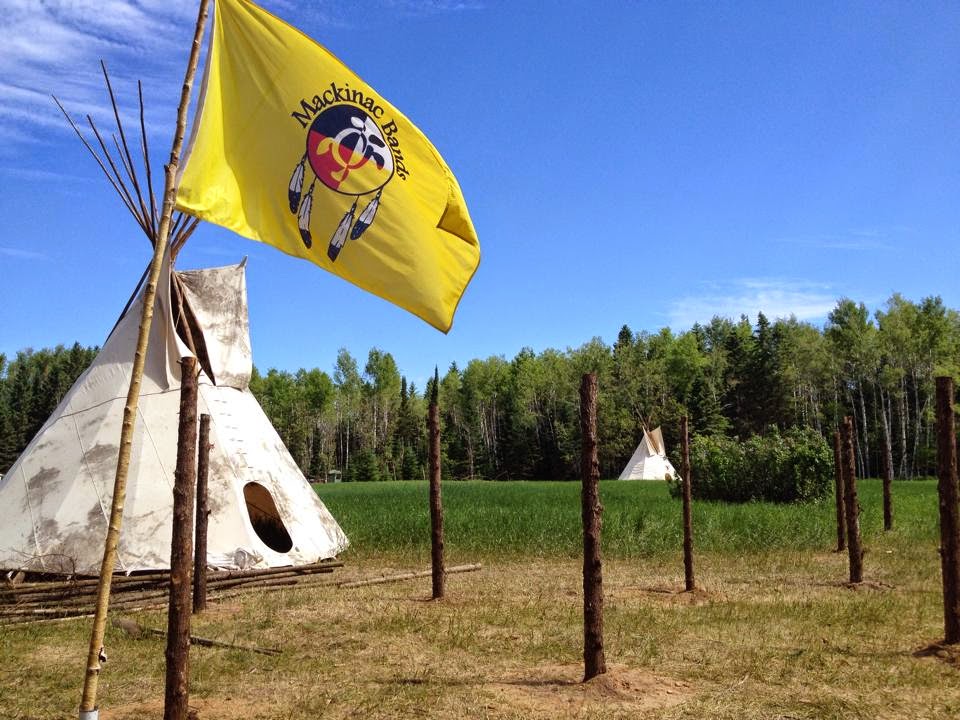 The flag of the Mackinac Bands of Chippewa and Ottawa Indians flies in Michigan. Photo by Fuyuko Hara / Facebook

The Mackinac Tribe of Michigan must go through the federal recognition process if it wants to follow the Indian Reorganization Act, a federal judge ruled on Tuesday.

The tribe's Ojibwe and Odawa ancestors signed a series of treaties between 1783 and 1855 and they were identified a distinct community by the Bureau of Indian Affairs as recently as 1926. With that in mind, tribal members asked the Interior Department to conduct a secretarial election in order for them to organize under the IRA.

When nothing came of the request, the tribe went to court in hopes of forcing action. But Judge Ketanji Brown Jackson said the lawsuit was premature because the tribe had not exhausted its administrative remedies -- namely the Part 83 federal recognition process.

"Plaintiffs do not dispute that the Part 83 Process is the mechanism by which [Interior] Secretary now recognizes tribes and consequently determines whether Indian groups are eligible for federal benefits such as reorganization, yet plaintiff concedes that it has not pursued those regulatory procedures," Jackson wrote in the 29-page decision. "Although plaintiff Mackinac Tribe may have approached the Secretary to ask for an election pursuant to the IRA, and thereby invoked the administrative process to some extent, it did not ask the agency the relevant question for the purpose of the administrative process—i.e., whether the Mackinac Tribe satisfies the Part 83 requirements for federal recognition—which, according to the agency, is an indispensible precursor to any request that the Secretary call an election for reorganization of the tribe," Jackson added.

At least one Mackinac group, the Mackinac Bands of Chippewa and Ottawa Indians, has filed a petition with the BIA for federal recognition. Some Mackinac descendants are members of, or are eligible for membership, in the Sault Ste. Marie
at 8:51 AM No comments: 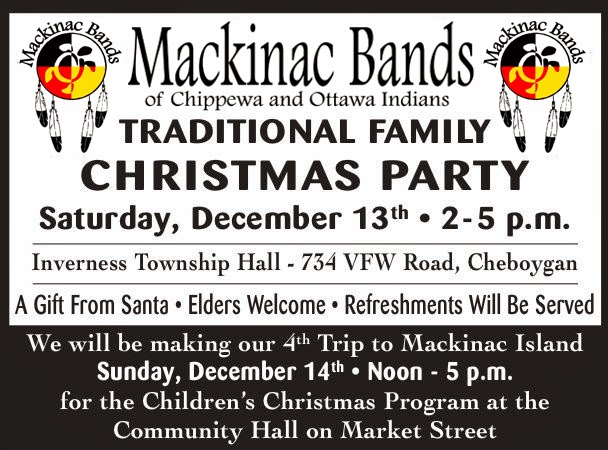 After almost 200 years, you the people are slowly suffering what we the Indians went through. You are not the land of the free. My people still live on reservations, and there are very few opportunities for us. Other people from other lands are living here more freely than we are. They have rights and religious freedoms and celebrate according to their heritage. We couldn't! They get a good education and job opportunities. It makes me mad to think of other races having more rights than my people do.


Still more people come over from other countries because they want to live and be like Americans: 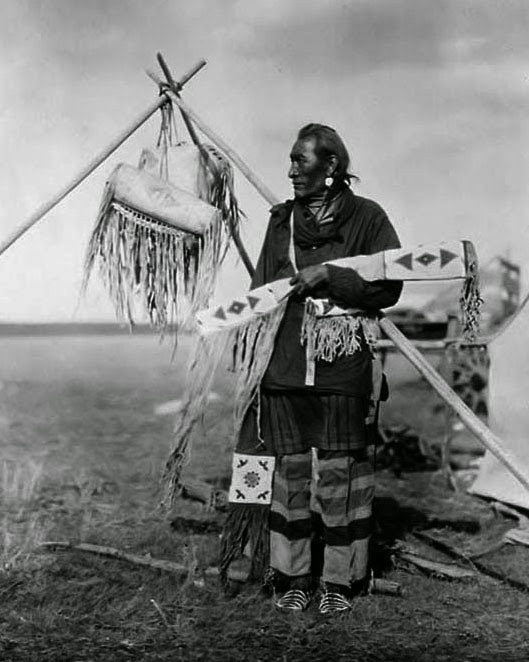 But they refused to speak your language, worship in your churches and celebrate your holidays. So by giving them freedom and rights, they are slowly taking away yours. No prayer allowed in schools, taking God out of the swearing in at court, no 10 Commandments, no Christmas displays at City Hall and no Christmas celebrations in school. What's next? How about "in God we trust" on our money?

Now you are giving up everything that you so proudly based your new nation on.
at 7:13 AM No comments: 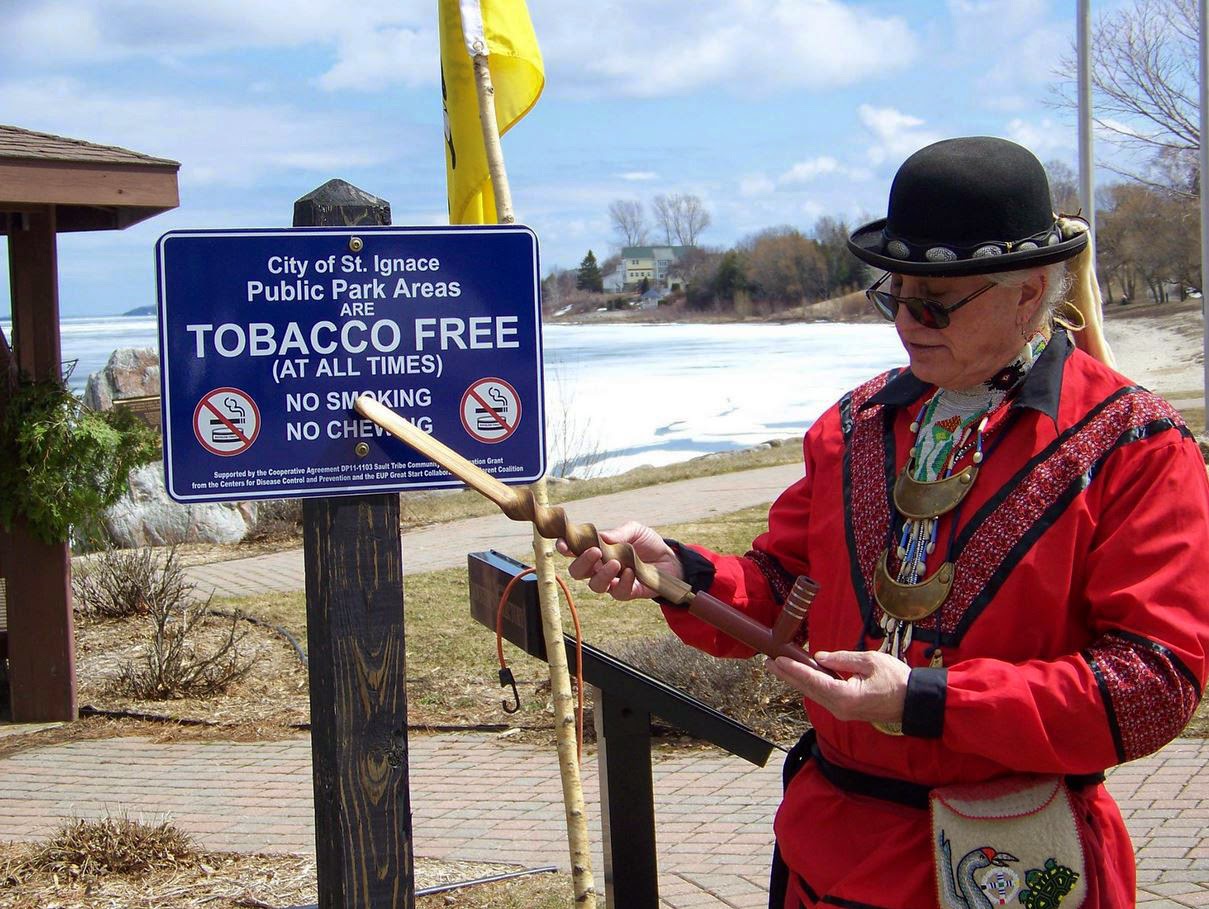 The Native American peace pipe is not restricted to being used only be Native Americans, but it is a spiritual thing and what it symbolizes must be respected by everyone attending the ceremony.  Other types of pipes used in ceremonies were the medicine pipe and the war pipe.  The Indian that carried the peace pipe was often allowed to pass through enemy territory out of respect.  The war pipe had red feathers symbolizing blood and was smoked before going into battle.
at 7:12 AM No comments:

Concerned that Mackinac peoples have suffered from historic injustices as a result of being disposed of their lands, Dennis Banks signs a "hand drum" in solidarity with the Mackinac Bands. 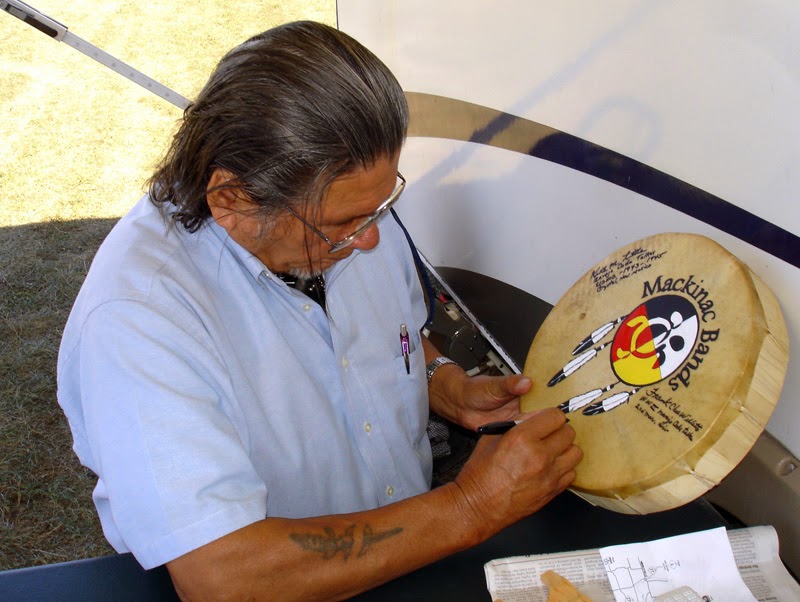 Dennis Banks, national leader and spokesperson of the Anishinabe Nations, recognizes the Mackinac Ottawa for their cultural and spiritual traditions. Visiting Beaver Island in 2013, Dennis is convinced that the sacred Sun Dance was once held there.

A video film documentary of the Mackinac Bands struggle for Reaffirmation is in the early planning stages and conversations with film producers for the HISTORY CHANNEL. Banks, a life lone advocate for native rights will visit the Mackinac area again this summer. We welcome his help in development of the Mackinac history project.
at 7:10 AM No comments:

At the 2014 Fall Gathering Chief Darryl Brown shares with the Mack Bands members that we are at a crossroad. 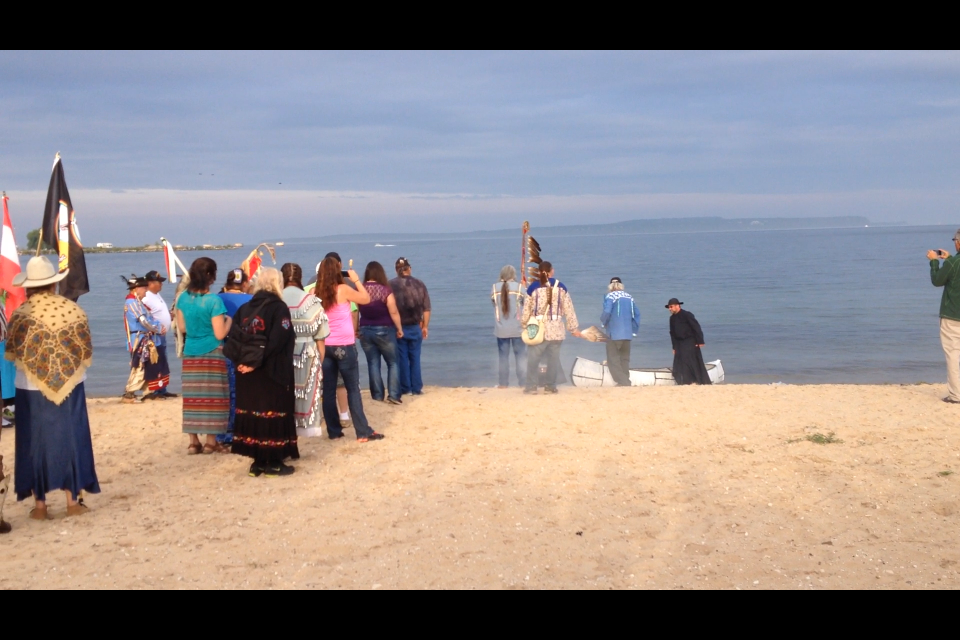 Chief Leonard Crow Dog and Mackinac Band Member Ronald Bushnell at the feast Sunday afternoon after the AIM Gathering of the Sacred Pipes Sundance in Pipestone Minnesota. Saturday afternoon Ron had the Honor of meeting him, listening to some of his teachings & Saturday evening taking part in a Sweat Lodge Ceremony lead by Chief Leonard Crow Dog on the Sundance grounds. 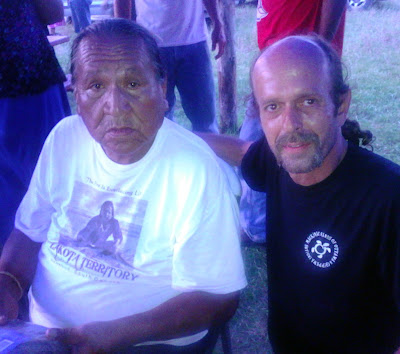 A Native American group has asked the federal government for recognition as a tribe. 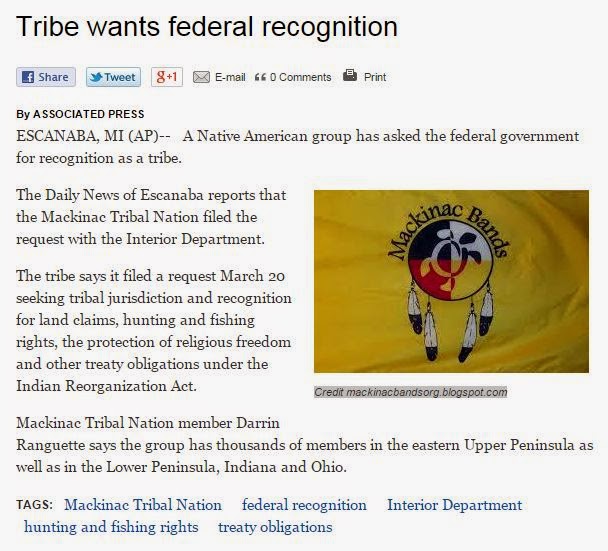 The Daily News of Escanaba reports that the Mackinac Tribal Nation filed the request with the Interior Department.

The tribe says it filed a request March 20 seeking tribal jurisdiction and recognition for land claims, hunting and fishing rights, the protection of religious freedom and other treaty obligations under the Indian Reorganization Act.

Mackinac Tribal Nation member Darrin Ranguette says the group has thousands of members in the eastern Upper Peninsula as well as in the Lower Peninsula, Indiana and Ohio.
at 10:06 AM 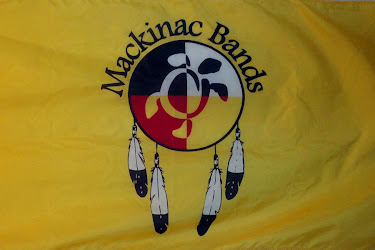 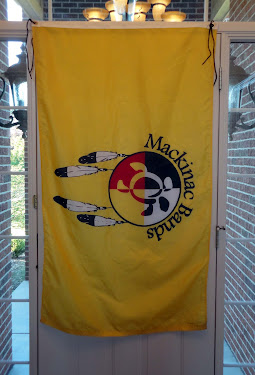